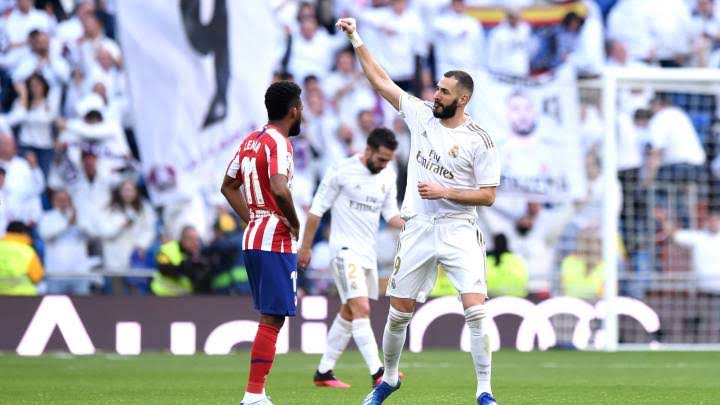 Lots to cheer about in the Real Madrid dressing room after the 1 – 0 Derby win over Atletico on Saturday afternoon. Along with the victory, two of Real Madrid’s key players, Sergio Ramos and Fede Valverde, hit personal milestones in the match (one of which, admittedly, is slightly more impressive than the other).

Sergio Ramos marked his 42nd Derby appearance today, which puts him on par with Manolo Sanchis and Gento for the most Derby appearances ever. An incredible run and a testament to his durability.

The breakdown of his Derby appearances are as follows:

Ramos has scored five goals in this matchup.

Let’s also give a shoutout to the young buck Fede Valverde, who, with today’s appearance, marked his 50th game in a Real Madrid jersey. What a feat!

It needed a moment of magic and Ferland Mendy delivered it in the 56th minute, landing an inch-perfect cross on the boot of Karim Benzema who buried the only real chance he was presented all afternoon to break Atlético’s resistance and hand Madrid a 1-0 win that sent Zinedine Zidane’s side six points clear at the top of LaLiga pending Barcelona’s result against Levante on Sunday.

Atlético were always going to struggle to mount a serious challenge without Joao Félix, Koke and Diego Costa available but the visitors can feel aggrieved after a decent penalty shout against Álvaro Morata was waved away and Ángel Correa slammed the foot of the post in an opening half that Diego Simeone’s side won on points.

However, Real have made a habit this season of nicking important goals and Benzema, who had been marshalled expertly by the Atlético defence all afternoon, gleefully side-footed home after Mendy found that goldilocks zone between Jan Oblak and the nearest defender, Stefan Savic, to tee up the Frenchman for his 12th league goal of the season. Real had not beaten Atlético in the Bernabéu since 2012 in Liga action but took full advantage of a visiting side shorn of a creative spark to set that record straight on Saturday.