Liverpool Youngsters see off Shrewsbury in FA Cup 4th Round 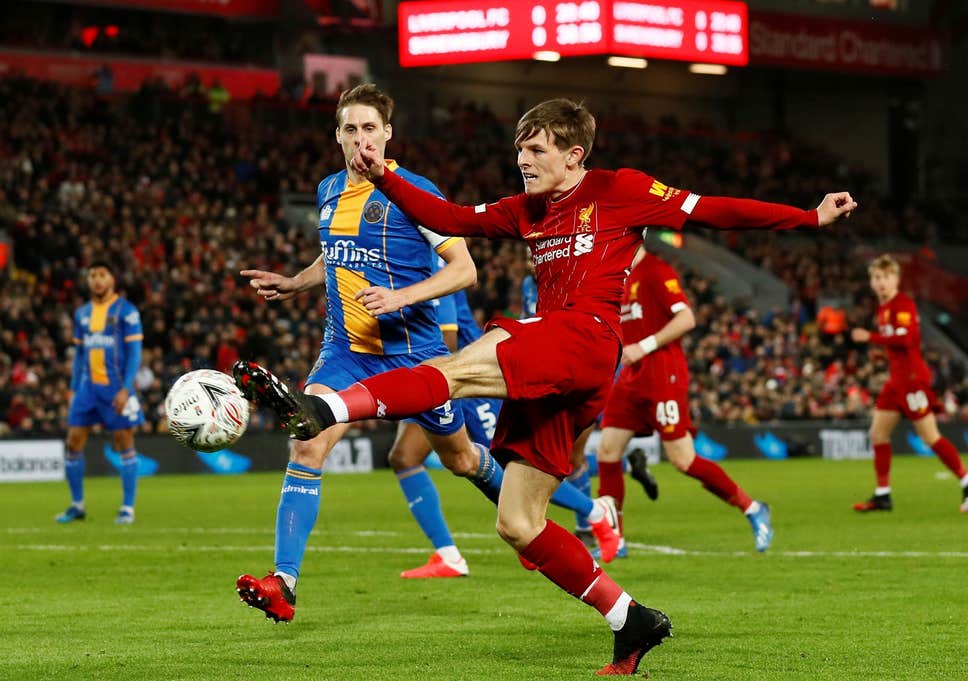 Liverpool’s FA Cup dream continues, after one of the most remarkable wins in the club’s history.

On a night when the Reds selected their youngest ever starting XI, on a night when their senior players were on their jollies and Jurgen Klopp watched from behind the screen of his laptop, Neil Critchley and his under-23 side delivered the goods.

Actually, to call this an under-23 side would be an exaggeration. Seven of Critchley’s team were teenagers, and three  – Liam Millar, Adam Lewis and Jake Cain – were debutants. The average age of the starting XI was 19 years and 102 days.

The captain, Curtis Jones, was the youngest Liverpool have ever selected in a competitive game, and what a performance the young Scouser produced. “Self-belief is probably not one of his weaknesses,” Critchley had suggested on Monday, and after 90 minutes here we knew exactly what he meant.

Jones is a star of the future, and this display underlined it. He took responsibility, he carried the ball, he tried his flicks and his tricks and he drove his side on. “A leader on the pitch,” was how team-mate Pedro Chirivella, outstanding in the centre of midfield, described the 19-year-old.

Liverpool’s winner owed plenty to fortune. They’d seen Shaun Whalley, a boyhood Red, have a goal chalked off for offside courtesy of VAR before, with 15 minutes remaining, Neco Williams, as he had in the initial tie in Shropshire, forced an own goal with a cross from the right.

Ro-Shaun Williams, the former Manchester United defender, was the man who headed the ball past Max O’Leary in front of a jubilant Kop. Heartache for him, delight for the rest. Harvey Elliott, the Liverpool player nearest to Williams, celebrated as though he’d scored it. Nobody cared. This was a goal for everyone in red.

It was a goal Liverpool merited, too. From Caoimhin Kelleher in goal to the tireless Liam Millar in attack, they were heroes. Jones was brilliant, Chirivella too. Ki-Jana Hoever and Sepp van den Berg turned in performances that their compatriot, Virgil van Dijk, would have been proud of. Williams and Lewis were outstanding at full-back, while Cain, Elliott and Leighton Clarkson played with a potent mix of youthful abandon and tactical discipline.

They, and Critchley, deserved every second of the ovation which greeted them at the final blast of referee Andy Madley’s whistle. “It was a release of emotion,” Critchley said, having been mobbed by his players in front of the Kop. “Let’s be honest, it’ll probably never happen.”

No wonder Liverpool fans believe their club is special. Time and again, Anfield produces these moments, these rub-your-eyes and ask-the-person-next-to-you-did-that-really-just-happen moments.