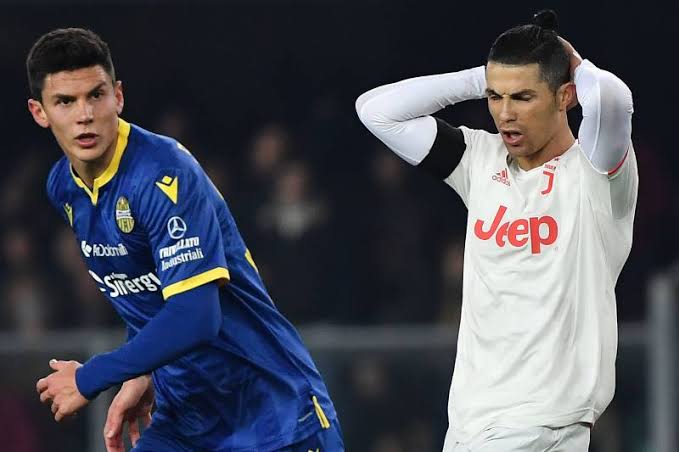 Cristiano Ronaldo has become the first Juventus player to score in 10 straight Serie A games as Maurizio Sarri’s side fell 2-1 to Hellas Verona.

After celebrating his 35th birthday midweek, Ronaldo opened the scoring in the 65th minute as he did well to create space in the box and fire a low shot into the bottom left corner.

That goal meant the former Real Madrid man has now scored in 10 consecutive Serie A games and has taken his league tally for the season up to 20.

In 2005, David Trezeguet struck in nine straight domestic matches for Juve with Ronaldo now setting a new benchmark for the club.

Despite once again starring in the final third, Ronaldo’s effort wouldn’t prove enough for Sarri’s side as they were stunned by a determined Verona outfit.

Former Sunderland and AC Milan attacker Fabio Borini brought the home side level in the 76th minute before VAR intervention saw Verona awarded a penalty for handball in the 86th minute.

Giampaolo Pazzini was able to hold his nerve from the spot to hand Juventus a surprise defeat that gives Inter the chance to claim top spot in Serie A should they beat Milan on Sunday.

Antonio Conte’s side are currently three points shy of Juve but with a game in hand and superior goal difference they can leapfrog Sarri’s men by the end of the weekend.

While Ronaldo has been in impressive form this season, his advancing age saw Bayern Munich this week declare he is too old for them to consider a possible transfer.

“Of course there are many names linked with us in the press,” club president Herbert Hainer told TZ. “But Ronaldo is a bit too old for us.”

The Juventus star himself conceded he never saw himself continuing to be so prolific on the pitch at the age of 35.

“This never came into my mind. I wanted to be a professional footballer, but I didn’t think I was going to win everything I’ve won.

“To play at Juventus gives me the chance to win it again. We know it’s difficult, it depends on many factors, but it’s possible because we have a good team.

“We must take one step at a time going forward.”

Juventus next face AC Milan on Thursday in the first leg of their Coppa Italia semi-final.