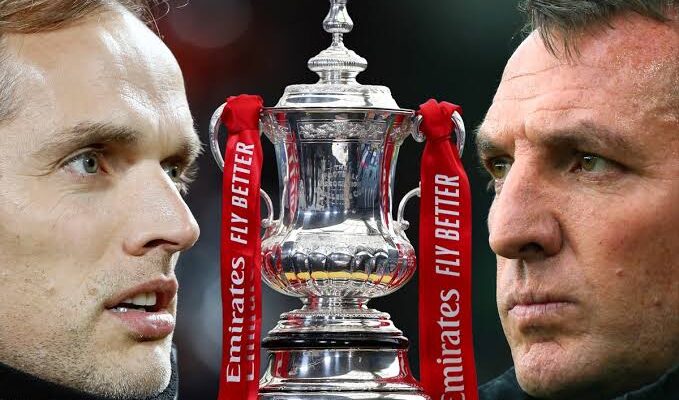 Saturday is the day, Wembley stadium is the location, football’s oldest club competition; the English FA Cup will crown a new champion this year.

Chelsea will lock horns with Leicester City in the FA Cup final in what promises to be a tactical warfare between both managers, Thomas Tuchel and Brendan Rodgers.

Tuchel’s Chelsea are England’s form team at the moment, making their way up from 10th to 4th in the premier league while also reaching the UEFA Champions League final.

Brendan Rodgers’ Leicester City continue to over-achieve, they sit 3rd on the Premier League table and are could cap off an impressive season with a trophy.

Chelsea are favourites for this one, both on current form and through history. The Blues love playing in the FA Cup, they’ve played in 4 of the last 5 FA Cup finals and have won it 8 times in total, the last time in 2018.

Leicester City on the other hand have not enjoyed great success in this competition, they’ve been finalists on 2 separate occasions but lost both time. Perhaps the 3rd time is the charm.

There are some little storylines in between this huge game to follow. Chelsea key players, Ngolo Kante and Ben Chilwell will both be playing against their former club and Leicester’s current coach, Brendan Rodgers used to be an assistant manager at Chelsea.

For Tuchel, he will be hoping his guys perform better than they did in the midweek against Arsenal, if Chelsea play as well as they’ve been playing recently, it’s hard to see Leicester doing them any damage.

The Blues currently boast the best defence in Europe, keeping clean sheets against Manchester United and City, Real and Atletico Madrid, Liverpool and Tottenham since Tuchel took over.

The latest challenge for the famed Chelsea defence would be to keep red-hot Kelechi Iheanacho from scoring.

The Nigerian has been in scintillating form of late, overtaking Jamie Vardy as Leicester’s top scorer and even scoring crucial goals to help them get to the final.

He scored a brace in the quarterfinals against Manchester United and the only goal in the Semis against Southampton to set up this clash and he will be looking to do it again in the final this time.

Tuchel will most certainly set Chelsea up with his 3 at the back and a double pivot in midfield, boosted by the timely return of Mateo Kovacic from injury.

Timo Werner would most likely return to the team as he was rested against Arsenal, and the durable Mason Mount is another guaranteed starter if he’s fit.

While it is unclear what shape Rodgers will go with, he’s played with 3 or 4 at the back multiple times this season but the personell is more predictable.

You can expect Kelechi Iheanacho to start alongside Jamie Vardy, and the midfield pivot of Wilfried Ndidi and Youri Tielemans a constant for the Foxes.

Johnny Evans was rested in the 2-1 win away at Manchester United, so he’s expected to return to the side, while Kapser Schmeichel will almost certainly be in goal for Leicester.

If all goes to plan, then it should be a Chelsea win. Leicester are a good team but simply not as good as their opponents unless something out of the ordinary happens.