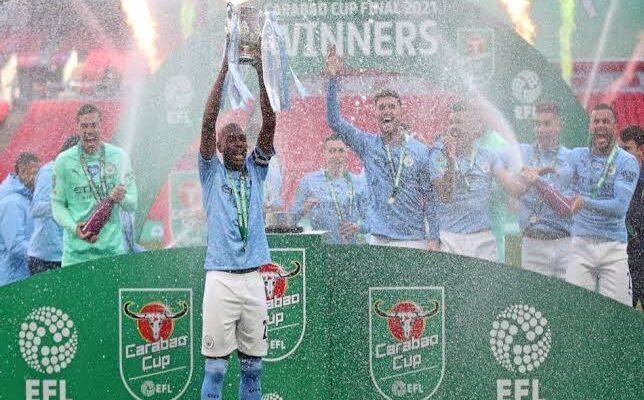 Aymeric Laporte headed in the all-important winner in the EFL Cup final for Man City against Tottenham Hotspur.

The Frenchman, who could have been sent off earlier in the game, nodded in from a corner 10 minutes from time as City claimed a victory their superiority fully deserved.

Spurs interim manager Ryan Mason had gambled on the fitness of Harry Kane but the England captain hardly threatened as City completely dominated.

The Cityzens created chance after chance, Raheem Sterling put the ball wide from a Riyad Mahrez cross before having another good chance brilliantly blocked by Eric Dier.

Foden thought he had scored after De Bruyne whipped in a cross and a chance fell to him at close range but his effort deflected off Toby Alderweireld and hit a post.

Spurs offered little threat going forward, and Sterling went close again when he attempted to lift over Huge Lloris from a tight angle and Mahrez twice narrowly missed the target in quick succession.

City kept coming and twice threatened on the counter-attack before De Bruyne and Mahrez were closed down. Fernandinho then headed at Lloris, Mahrez forced another save and Ilkay Gundogan volleyed wide.

Finally City got the goal their superiority deserved as Laporte came forward and powered home a header from a De Bruyne corner. There was no way back for Spurs as City pressed to the end.

It was a record-equalling eighth League Cup triumph for City and their sixth in the past eight seasons.