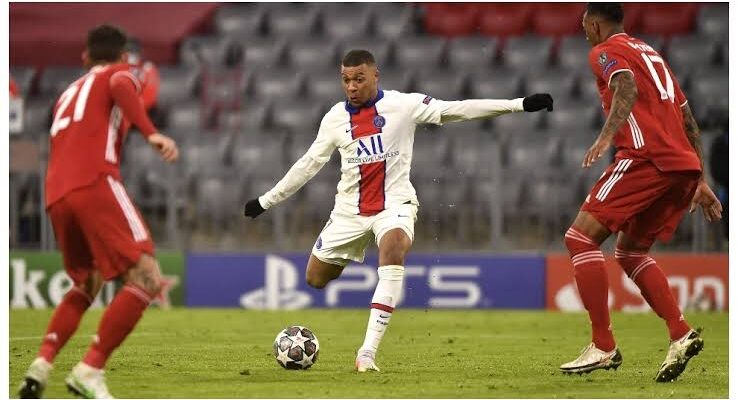 The UEFA champions league is at the quarterfinals stage and the first leg of each tie was played on Tuesday and Wednesday 6th and 7th of April.

All four games produced goals and were exciting to watch, ramping up the anticipation for the 2nd legs because there’s still no clear indication of who progresses to the semis.

Both teams came into this match missing key players and not playing at their best level, but Real Madrid showed everyone that form is temporary, class is permanent, dispatching Liverpool with ease.

Toni Kroos put up a masterful display in midfield, setting up Real Madrid’s opener with a brilliant long range pass which was finished off beautifully by Vinicius.

Kroos was influential in the 2nd goal as well, his crossfield ball was redirected by Trent Alexander-Arnold’s header, unfortunately into the path of Marco Asensio who gladly took the opportunity, lobbing the ball over the on rushing Alison to make it 2-nil.

Jürgen Klopp’s side improved after the interval with Mohamed Salah drilling in off the bar to reduce arrears but their defence could not hold back Vinícius Júnior, who swept home his second to give the Merengues a two-goal cushion ahead of the return.

Pep Guardiola’s Manchester City had a much difficult game against Dortmund than expected, needing a late Phil Foden goal to win 2-1, after the Germans had gotten a valuable away goal.

Kevin De Bruyne started and finished a City counterattack for the opener. Foden rolled the ball across goal to reach Riyad Mahrez beyond the back post, the latter’s cutback found De Bruyne arriving in the box, and the captain shifted it neatly into his stride to steer home.

A threat throughout, Dortmund levelled late on as Marco Reus latched onto Erling Haaland’s through ball to slot past Ederson and seemingly snatch a draw for BVB. However, Foden’s subsequent close-range finish, teed up by İlkay Gündoğan following a lasered pass by De Bruyne, sealed the hosts’ victory in Manchester.

The result sets up a tantalising 2nd leg, as the tie could potentially still go either way, Manchester City have the lead but Borussia Dortmund will have home advantage and an away goal.

Chelsea with a clean sheet and 2 away goals are looking the most likely semi final candidates after the 1sr leg, a great result against a dangerous Porto team.

Porto had their first-half chances but it took a moment of Mason Mount magic to open the scoring, the in-form England forward swivelling past Zaidu with one delightful touch before finishing low across Agustín Marchesín with his second.

The home side had further opportunities after the break, Moussa Marega most notably thwarted by Edouard Mendy’s speed off his line, but largely it was the Blues who were the more threatening.

César Azpilicueta’s close-range header missed the target altogether and Christian Pulišić’s thumping shot crashed against the bar. However, Ben Chilwell made no such mistake after catching Jesús Corona in possession and rounding Marchesín to slot into the unguarded net and make it 2-0.

The repeat of last season’s final lived up to the hype, both teams missing key players in Lewandowski and Veratti but the quality of players in both squads made this the match of the round.

PSG raced into a 2-goal lead as Neymar set up Mbappe and Marquinhos respectively with two sublime assists, putting the visitors firmly in the driver’s seat.

Bayern continued to create chances and although Keylor Navas was doing a whole lot to keep PSG’s lead intact, he would eventually be beaten by Choupo-Moting, the man who was a PSG player when these teams last met in June.

The end-to-end action remained relentless after the interval and Bayern drew level when Thomas Müller glanced Joshua Kimmich’s free-kick past the otherwise inspired Keylor Navas. Mbappé had the final say, though, clinically driving in his second from a slick Paris counterattack.