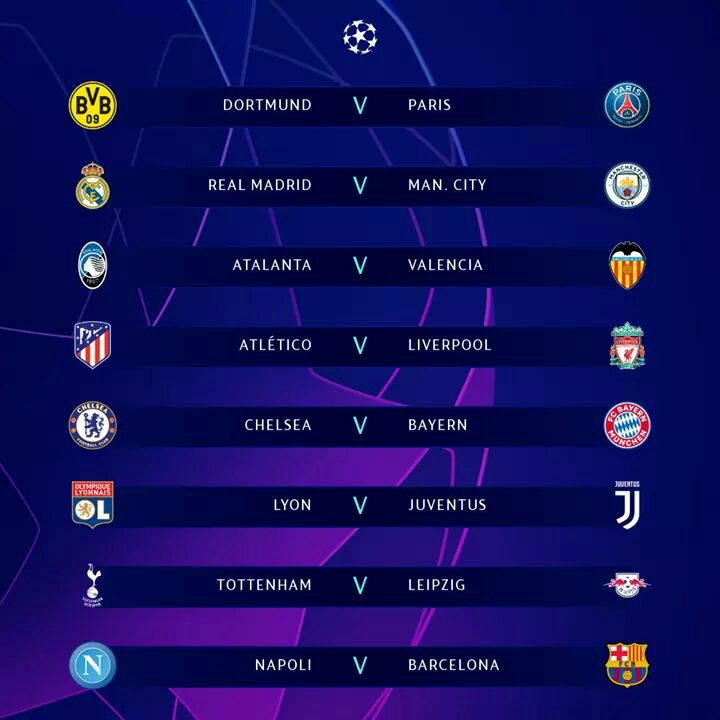 UEFA ROUND OF 16 DRAW

Manchester City will face Real Madrid while holders Liverpool have been drawn against Atletico Madrid in the last 16 of the Champions League.

Chelsea take on Bayern Munich in a repeat of the 2012 final won by the Blues while Tottenham face RB Leipzig.

In the pick of the other ties, Borussia Dortmund will play Paris St-Germain and Napoli take on Barcelona.

This season’s final is on 30 May at the Ataturk Stadium in Istanbul, the ground where Liverpool won the epic 2005 final against AC Milan, when they came back from three goals down to draw 3-3 and win on penalties.

The Reds’ last-16 draw also takes them back to the stadium in which they won last year’s final – Atletico’s Wanda Metropolitano.

The Frenchman won the competition three times in a row with Los Blancos from 2016 while Guardiola won it with Barcelona in 2009 and 2011.

That was Guardiola’s last triumph in the competition though, and his City side were beaten by eventual runners-up Tottenham in the quarter-finals last season.

Spurs have changed manager since then, with Mauricio Pochettino succeeded by Jose Mourinho, who has two previous Champions League wins to his name – Porto in 2004 and Inter Milan in 2010.

Their opponents RB Leipzig currently lead the German Bundesliga and have in Timo Werner one of Europe’s most coveted strikers and in Julian Nagelsmann one of the continent’s most promising young coaches.

Arsenal, Celtic, Manchester United, Wolves and Rangers will find out their Europa League last-32 opponents when that draw takes place at 12:00 GMT on Monday.