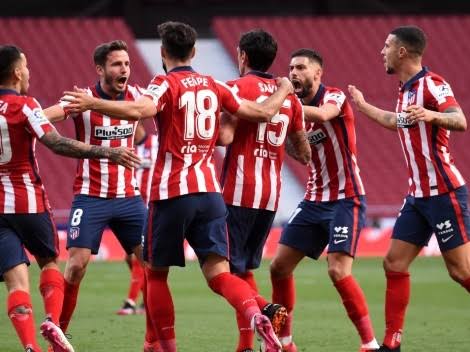 The La Liga title race came to an exciting end with twists and turns but Atletico Madrid emerged the champions of the 2020/21 season.

Diego Simeone’s men came into the final day knowing a win away at relegation-threatened Valladolid would be enough to earn them their crown but things didn’t start according to plan.

Real Valladolid needed to win and hope results elsewhere favoured them to escape relegation and they stunned Atletico by going in front.

The home side broke quickly from an Atletico corner kick and caught them off guard with Oscar Plano converting calmly after running half the length of the pitch.

The situation was made slightly more bearable by the news that Real Madrid had also conceded a goal around the same time, Villareal took the lead to leave both teams as they were going into halftime.

The second half started with Atletico on the front foot, Diego Simeone must have said some harsh words, the league leaders started moving the ball better and creating chances.

Eventually they equalised through Angel Correa, the Argentine forward dribbled past 3 Valladolid players and toe-poked the ball into the bottom corner from outside the box in the 57th minute.

They eventually took charge of the situation by getting themselves in front in the 67th minute, Luis Suarez broke free and raced into a one on one situation before calmly finishing with his left foot.

It was his 21st La Liga goal of his first season with Atletico Madrid, cementing his place as one of the best signings in the club’s history.

Real Madrid on the other hand managed to turn it around as well, Karim Benzema and Luka Modric with two brilliant goals but it wasn’t enough in the end.

Diego Simeone’s men did their part and celebrated wildly at the fulltime whistle, the 11th La Liga title for the club and the 2nd under the Argentine manager.