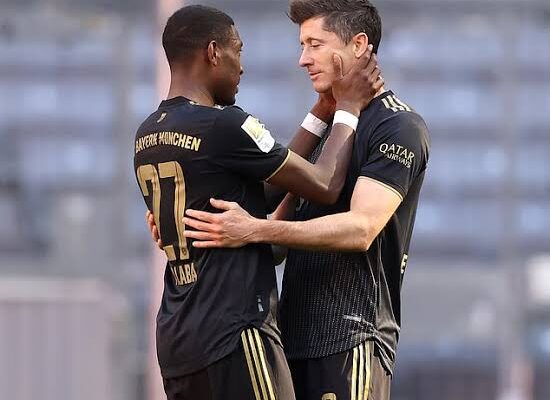 Bayern Munich honoured David Alaba in his last game for the club by presenting him a commemorative plaque before the start of the match at home to Augsburg.

28-year old David Alaba played his last game for the club where he has spent his entire career and is now set to leave as a free agent when his contract expires this summer.

Other outgoing legends, Jerome Boateng, Javi Martinez and the manager, Hansi Flick were given the same treatment as a show of appreciation in their last game as Bayern employees.

The game itself was a mere formality with nothing on the line, Bayern have already secured the league title and the only thing left to look forward to was seeing Lewandowski make history.

The striker had tied Gerd Muller’s record of most goals in a single Bundesliga campaign with 40 and this game was the last chance to break it and set his own record.

Bayern raced into the lead just 9 minutes in via an own goal and completely dominated proceedings as expected, 4-0 up at halftime and cruising to the win.

Augsburg scored twice in the space of 5 minutes in the second half but Bayern wrapped it up in additional time, Robert Lewandowski leaving it late to break the record.

As for the departing legends, it was an emotional but enjoyable afternoon, marking an end of their current journey and the start of a new one.