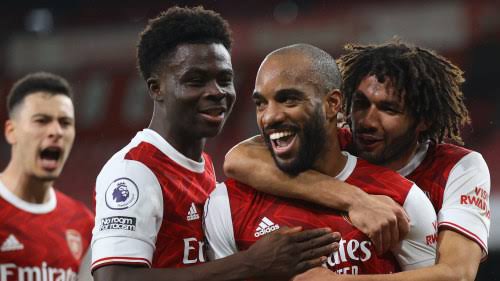 Arsenal notched a massive win against North London rivals, Tottenham Hotspurs at the Emirates stadium on Sunday, claiming the bragging rights in the city along with 3 points.

This is the first time Arsenal have won a North London derby since December 2018 and they had to come from a goal down to beat 10-man Tottenham Hotspur 2-1, making it all the more sweeter for the fans.

Spurs were handed a major blow when key player, Son Heung-min pulled up with an injury as he was chasing a long ball, further crippling an already weak attack, he was replaced by Erik Lamela.

The substitute would go on to write his name all over this match, Lamela gave Spurs the lead 33 minutes into the match with what was a truly glorious finish, an aesthetically satisfying rabona, most likely a contender for goal of the season.

The goal was the one time Tottenham posed danger to Arsenal in the first half and the Gunners were very much on the front foot, looking the more likely to find the net of the two sides.

And the pressure soon told, Arsenal were back on level terms through Martin Odegaard on 44 minutes as his strike took a deflection off Toby Alderwereld, ensuring both teams were tied at halftime.

Davinson Sanchez brought down Alexandre Lacazette in the box and a penalty was awarded, the Frenchman wasted no time tucking away the spot kick on the 64th minute mark.

Things went from bad to worse for Spurs as Lamela turned from hero to villain as he was sent off in the 76th minutes for a second bookable offence on Kieran Tierney.

Arsenal withstood some late pressure from the 10-men of Tottenham and held on for a 2-1 win. Despite the win, Arsenal remain in 10th place on 41 points while Spurs stay seventh on 45 points.