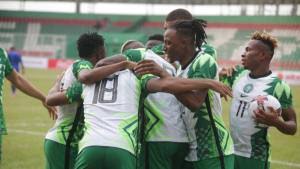 A tense encounter at the Stade Charles De Gaulle ended in the most dramatic way possible, Paul Onuachu scored a 94th minute winner to help Nigeria defeat Benin Republic by a single goal to nil.

Heartbreak for Benin, who were seconds away from getting the point they needed to book their spot at next year’s Africa Cup of Nations.

Gernot Rohr’s side created chance after chance but could not find a way past Dijon’s Beninoise goalkeeper Saturnin Allagbe who was impressive in the match.

And as it approached the last minute of stoppage time and Benin thought they had done well enough to earn the all important point, Paul Onuachu headed home a rebound after Allagbe had save Victor Osimhen’s initial shot.

The Genk striker has been in red hot form for his club this season but has struggled to replicate it on the international stage, this was only his second goal for the Super Eagles since he scored in his debut against Egypt 2 years ago.

Paul Onuachu’s 94th-minute winner means that Nigeria, who had already qualified after Lesotho and Sierra Leone’s draw earlier in the day, go through to the finals in Cameroon as winners of Group L.

In the process, Nigeria became the first team to defeat Benin Republic at home since they lost to Algeria all the way back in June 2013.

Despite the blow of having qualification snatched from their grasp today, though, Michel Dussuyer’s men remain very well placed indeed to reach the finals: they will still finish second in the group as long as they avoid defeat when they face Sierra Leone in Freetown on Tuesday.