Manchester United vs Liverpool Postponed Due To Fans’ Protest 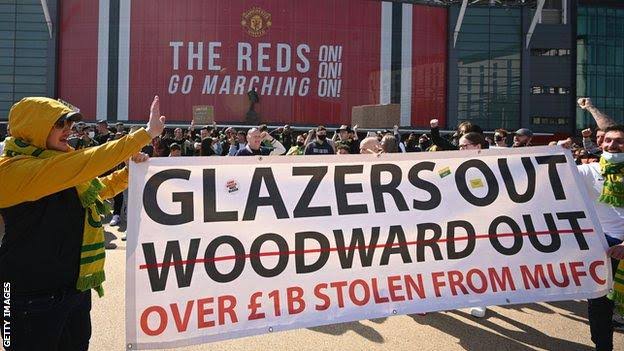 Manchester United’s Premier League game against Liverpool was postponed after about 200 fans broke into Old Trafford to protest against the Glazer family’s ownership of the club.

The fixture was scheduled to kick off at 16:30 Nigerian time on Sunday but could not continue as a result of the unrest.

Police said two officers had been injured following the protests.

It is the first time a Premier League match has been postponed because of fan protests.

Fans had gathered outside the ground and scores of green and gold flares – the colours of United’s first shirts when they were formed as Newton Heath in 1878, and of the original anti-Glazer protests in 2010 – were set off at 14:00.

The protests follow United’s decision, along with five fellow Premier League clubs, to join the European Super League (ESL) last month, before subsequently all pulling out.

Supporters are currently not allowed into grounds because of the coronavirus pandemic but some United fans got onto the Old Trafford pitch to protest and, even though they were removed, some then made it back onto the grass later on.

“The security and safety of everyone at Old Trafford remains of paramount importance,” added the Premier League.

“We understand and respect the strength of feeling but condemn all acts of violence, criminal damage and trespass, especially given the associated Covid-19 breaches.

“We sympathise with the police and stewards who had to deal with a dangerous situation that should have no place in football.”

The Football Association will be liaising with United, the Premier League and safety authorities to find out exactly what happened and the reasons for it.

Both clubs had submitted their team line-ups for the hotly anticipated fixture but neither had left their hotels to go to the ground prior to the game being called off at just after 17:35.

United fans had also gathered at the Lowry Hotel where their side’s players were staying prior to the match.

Ole Gunnar Solskjaer’s side are currently second in the Premier League and a Liverpool win on Sunday would have handed Manchester City the title for the third time in four seasons.

Talks will now take place about re-arranging the game.