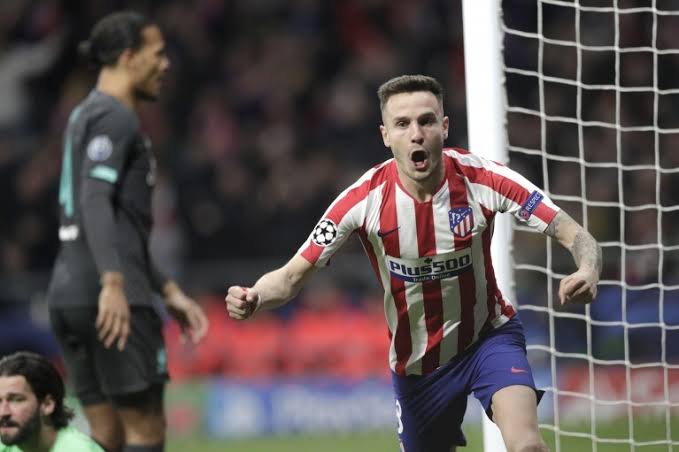 Just four minutes had elapsed when Atleti grabbed the game’s deciding moment, with Saul Niguez poking in at close quarters following a corner at Estadio Metropolitano.

The Reds dominated possession throughout the remainder, but were unable to breach the hosts’ stubborn rearguard, leaving the European champions with work to do in Anfield’s second leg in three weeks’ time in order to maintain the defence of their title.

Liverpool made two changes from the weekend victory at Norwich City as Saturday’s match-winner, Sadio Mane, and Fabinho were restored to the starting line-up in place of Alex Oxlade-Chamberlain and Naby Keita.

After 262 days, the Reds returned to the scene of their Champions League final glory at Estadio Metropolitano last June.

However, any sentiment was swiftly put to one side as they faced up to a tie Jürgen Klopp had described as the ‘most difficult’ they could face in the last 16 of this season’s edition of the tournament.

Indeed, Atletico quickly set about demonstrating exactly what the manager had warned against as a powerful start to the contest was rewarded with an opening goal after just four minutes.

It was Saul who got it, prodding in from a corner at close range after the ball had dropped into his path just inside the six-yard box.

Liverpool’s response, however, was a positive one as they set about seizing control and probing for an equaliser.

Nevertheless, it took a crucial touch from Andy Robertson to divert the ball away from Alvaro Morata on 20 minutes as the striker prepared to turn home Renan Lodi’s deep delivery at the back post.

Morata would threaten again soon after, with Alisson Becker needing to thwart his near-post drive with a sprawling stop.

Mohamed Salah then had the ball in the back of the home side’s net after pouncing upon Jan Oblak’s wayward kick and exchanging passes with Roberto Firmino; however, the Brazilian was flagged offside.

Robertson flashed a right-footed effort wide of the upright from a central position and Fabinho smacked over from range as the visitors continued to press.

Ten minutes before the interval, Liverpool opened up their hosts, only for Salah’s spin-and-shot to deflect off Felipe and loop over the crossbar as Atletico held onto their advantage heading into the break.

The Reds replaced Mane with Divock Origi ahead of the resumption of the contest – and seven minutes in, Joe Gomez’s diagonal ball into the area found the head of the unmarked Salah, but he could only glance off target on the stretch.

The direction of play mirrored that of the first half, with Liverpool seeing the majority of the ball but Atletico defending resolutely.

The La Liga side fashioned an opportunity for a second on 68 minutes, but Morata made a mess of his attempt from Lodi’s pull-back.

Oxlade-Chamberlain entered the action for Salah for the visitors – and they went agonisingly close to an equaliser when Jordan Henderson scooped Origi’s cross a matter of inches wide of the base of Oblak’s post.

The captain was forced from the field with a knock in the final stanza, with James Milner taking his midfield berth.

And as the contest edged towards its conclusion, Liverpool were unable to muster a leveller, leaving work to be done in the return meeting at Anfield next month if their defence of the trophy is to continue into the last-eight stage.

0 comments on “Liverpool on verge of Exiting Champions League”