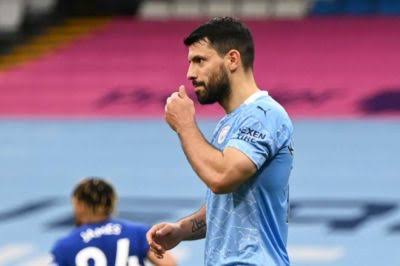 Sergio Aguero has issued an apology to his Manchester City teammates and fans of the club for his penalty miss in Saturday’s 2-1 home defeat to Chelsea.

Raheem Sterling opened scoring for City ahead towards the end of the first-half and moments later City had a perfect chance to double the lead after they were awarded a penalty.

Gabriel Jesus was fouled by Billy Gilmour and departing legend Aguero stepped up to take it, aiming to score another goal that seals City a title.

Yet things didn’t go to plan as the Argentine missed in embarrassing fashion after attempting a Panenka which was simply plucked out of the air by Edouard Mendy.

Hakim Ziyech would go on to equalise and Marcos Alonso gave Chelsea the win in the dying moments.

After the match, Aguero took to Twitter to apologise for his missed penalty.

“I would like to apologise to my teammates, staff and supporters for missing the penalty,” he wrote.

“It was a bad decision and I take full responsibility.”

Guardiola, however, moved to defend Aguero after the game.

“The taker makes the decision. I always tell him take one decision and take it fully convinced.

“He tried to do it this way. Nothing to add.”