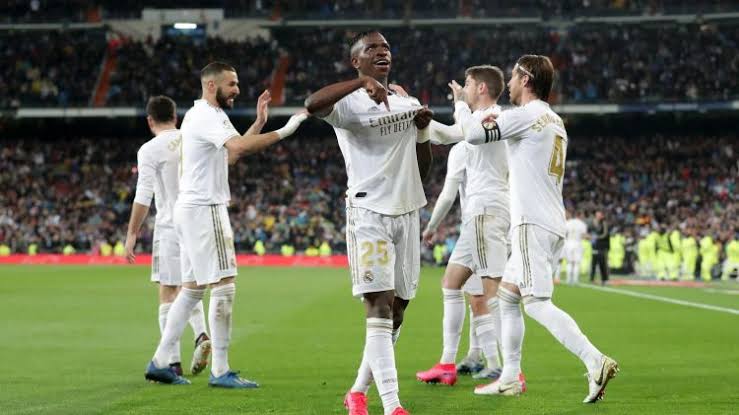 Vinicius Jr scored the opening goal in Sunday’s Clasico between Barcelona and Real Madrid and in doing so stole a bit of modern history from a vaunted opponent.

The young Brazil international broke into the penalty box, freezing Gerard Pique and bundled home a shot via a deflection from the vastly experienced ex-Manchester United man, leaving Marc-Andre ter Stegen helpless in the Blaugrana goal.

The winger became the youngest person to score a goal in Spain’s most famous fixture in the 21st century, replacing Lionel Messi, who bagged a hat-trick in 2007.

Vinicius had come in for some stick from the crowd at Santiago Bernabeu as his end product didn’t match his attractive approach play. All that was forgotten when the former Santos man made his vital contribution after 71 minutes.

The 2-0 win was sealed by Mariano Diaz, who struck almost immediately after coming on in injury time to seal all three points for Los Blancos.

Mariano became the first Dominican to score for Madrid in the process.

Since the turn of the century, no substitute has scored more quickly after their introduction from the bench than Mariano did today. Opta says that his goal came only 50 seconds after his introduction.

The win takes Madrid to the top of the table, one point clear of their fierce rivals, who have scooped the last two titles, and went some way to erasing the pain of Wednesday’s Champions League defeat to Manchester City at the same stadium. Defeat in this game would have seen Barca pull five points clear at the top of La Liga and left Zinedine Zidane’s team on the brink of a season without any silverware.

They have a chance to redress the City result as well as they travel to the Etihad on March 17 trailing by a single goal, but they must take that game in without their captain, Sergio Ramos who picked up a red card in the first leg.

Vinicius’ strike was only his second goal of the season in La Liga, though he has also scored in the Champions League and Copa del Rey this term.

He may not have been playing from the start at all had Eden Hazard not suffered an injury last weekend.

0 comments on “Vincus Helps Madrid to Clasico Win, With Record”